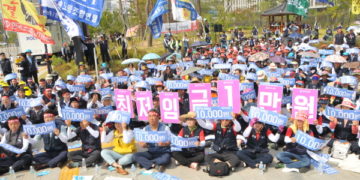 LOW UNION MEMBERSHIP There are only two legal unions in South Korea. The larger one, usually regarded as more moderate, is the Federation of Korean Trade Unions, FKTU. It claims 954,546 members in 2018 and was founded in 1961. Second largest is the Korean Confederation of Trade Unions, KCTU, with 786,563 members. Due to the … Continue reading South Korea: Unions and labour relations

Copy and paste this URL into your WordPress site to embed

Copy and paste this code into your site to embed