FORA · Why the feminist strike? 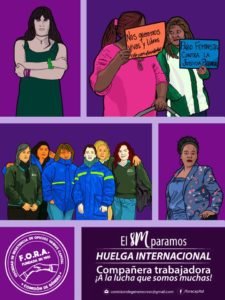 This March 8th with the comrades of the Gender Commission adhered to the S.R.O.V Capital we consider it`s necessary to raise the flag of the struggle of women, girls, lesbians, transsexuals and transvestites1 from all over the world who suffer daily patriarchal oppression.

In Argentina, in the month of June 2018, the Chamber of Deputies approved the right to voluntary termination of pregnancy. The vote closed at 129 in favor, 125 against and one abstention. It was a surprise ending after almost 24 hours of debate where the green tide marked presence in every moment. On the contrary, in August the Senate Chamber rejects this right. It was by 38 votes to 31.

They were 2 very intense months, where the subject was debated and made visible in different areas. That is how we saw ourselves discussing the problems in our jobs, schools and even homes. As a result, the “International Abortion Day” we went to the streets different unions, social organizations and organizations in favor of the decriminalization of the voluntary interruption of pregnancy. We march from Congress to Plaza de Mayo demanding our right because we believe that abortion is a privilege of class and we can not let our camrades, friends and sisters keep dying.

Along with this fight we also demand that the law of integral sexual education be put into effect in schools and in every possible space where we can inform ourselves about our rights. On the other hand, we also demand that contraceptive methods be within our reach, treating how unfruitful they can be since they are in primary health care centers (C.A.P.S) and hospitals in deplorable conditions.

On the other hand, the culture of patriarchy along with the media, which are the ones that make visible the morbidity of all the cases of women victims of femicides in our society, were responsible for ridiculing all of us who carried out this struggle. Deverting the importance of pointing to the behaviors of those who exercise these circles of violence that end with our deaths. We denounce the justifications of the patriarchal media against these aberrant facts. We know that the micro and macro machisms that defend are not an invention and we find them in all environments: work, student, domestic, in our organizations or even in the streets.

Femicides and transvesticide 2 in our region do not stop growing. According to the last report of the Procurator General of the Province of Buenos Aires in the last decade, 2638 women died just because they were women, 75% of the cases at the hands of relatives, couples or former partners, a femicide every 32 hours. 38% was perpetrated with a knife. From the beginning of 2019 until January 31, 26 femicides were registered.

According to figures from the Casa del Encuentro organization, between June 3, 2015 and May 29, 2018, there were 871 femicides (109 linked) and 24 transvesticide. 114 femicides from January to March and 4 transvesticide in what was 2018, a figure that is debatable given the 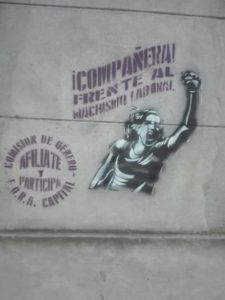 On the other hand, activists of the transvestite collective and organizations such as Trans Memory Archive denounce that in addition to the transvesticide there were at least 30 deaths of fellow victims of what is called “social transvesticide”.

“The most invisible numbers are those, those deaths, which are crimes too. The residue that leaves you the lack of attention of the State: For the exercise of prostitution, the lack of access to health. It is residual violence. All trans have residual violence. There is no awareness of that violence: From when you receive the scream “fag” until they attack you on the street. The deaths by industrial injectable silicone is a topic that is not talked about. And in health there are no treatments for removal and it is a permanent danger and self-inflicted by social mandates”, Lara Bertolini, transvestite activist and worker of the Public Prosecutor’s Office, told Presentes. 3

On the other hand it is necessary to mention and emphasize cases that go unpunished. To give an example; in Corrientes 20% of the cases are femicides since 2013. The data arises according to the statistical record of NORTH of Corrientes (daily). In Buenos Aires the case of Lucía Perez, young Marplatense, who was murdered in a terrible way. The Oral Criminal Court No. 1 of Mar Del Plata sentenced the defendants Matías Farías (25) and Juan Pablo Offidani (43) for possession of narcotics for aggravated commercialization, as it was detrimental to minors and in the vicinity of an educational establishment. Each was given 8 years in prison plus a $ 135,000 fine. The third accused Alejandro Maciel (61), charged with concealment, was acquitted. None were charged with rape, murder and torture.

We are working women and therefore our central struggle is against capitalism, which we consider an economic system based on human exploitation. Capitalism is today the main cause of the oppression of women and of any other dissident identity and patriarchy works as an axis to nuclear this oppression by guaranteeing it socially. We firmly believe that the struggle against patriarchy is also the struggle against capitalism, because the capitalist economic system accentuates and perpetuates our double exploitation. 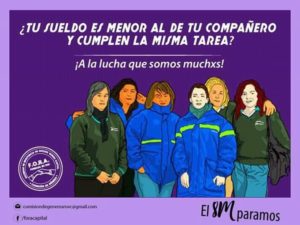 As working women we collectively organize ourselves to carry out our historical task: Destroying the capitalist economic system and its social ties of plundering. Only in this way will we be able to emancipate ourselves from all oppression.

We consider that the presence of women in the union is of vital importance because historically we have been denied to participate and we have been quickly excluded. This relegation, this exclusion has delayed our battle against the capitalist economic system. Well, as already mentioned, this economic system always needed patriarchy to shape its domination. We think and trust that our battle for emancipation is a battle for the liberation of the working class as a whole.

We must reinforce the struggle to end the oppression of women and any form of plundering and exploitation of workers.

Our primary objective will then be to intensify the struggle against patriarchy, to confront the violence of this economic system, to conquer and defend our rights.

From our workplaces, with our female partners, lesbians, transvestites and transgenders we propose to organize collectively to fight for a political, economic and social transformation. Building ties and relations of solidarity and closeness between women.

We affirm that our organization must be collective and of an emancipatory nature in such a way that all our struggles in the social revolution flow together.

It is necessary to assume our commitment and permanently maintain actions that advocate for the emancipation of our class, and thus carry out our historic task: to free ourselves from exploitation.

The transvestite activist Lohana Berkins -1965 – 2016- explains why transvestism and transsexuality are not the same: «We hold the transvestite identity not only by resorting to linguistic regionalism, but to circumstances and characteristics that make transvestism a phenomenon different from the North American and European transgenerity. In the first place, transvestites live different circumstances from those that cross many transgenders of other countries, who often resort to sex reassignment surgeries and aim to rearrange themselves in binary logic as women or men. Many Latin American transvestites claim the option of occupying a position outside of binarism and it is our objective to destabilize the male and female categories. Secondly, the word transgenerity originated from theoretical works developed within the framework of the American academy. In contrast, as I mentioned earlier, the term transvestite in Latin America comes from medicine and has been appropriate, reworked and incarnated by the transvestites themselves to call themselves. This is the term in which we recognize ourselves and which we choose to build ourselves as subjects of rights. »(Berkins, 2009, p.2)

The transvesticide is aggravated homicide for having been executed mediating gender violence for hatred of gender identity.

Internationalism and struggle against patriarchy

[CNT] Working women are overwhelmed. And we are fed up