Also for 2019, as USI-CIT, we strongly relaunch the 8th March general strike on workplaces.

A strike that we deem necessary to undermine oppression and gender violence, in a society still pervaded by strong discrimination and sexism despite numerous struggles for female emancipation that characterized the 20th century. Even today most of the world is based on a patriarchal perception of gender roles with defined and strict boundaries. This is evident from numerous contexts in which the body of women continues to be regulated according to the current morality that reflects the needs of a ruling class. The woman has always represented a subject to whom homework tasks, care of family environment and childcare are historically assigned. Thus, besides free care work, wage-earning work is added to many of them.

Delegation of the FAU in Northern Iraq 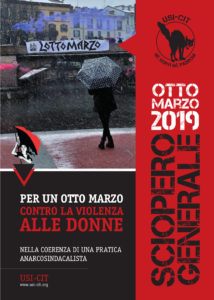 Italy, like Europe, is still a country where one out of three women aged between 16 and 70 has been a victim of the violence of a man, where nearly 7 million women have suffered physical and sexual violence and where about 200 women are killed each year by a husband, a boyfriend or an ex. 77% of these violences occurs in the family and in equal measure against Italians and foreigners. Furthermore, again in 2019, many European countries try to limit the free choice of women on the themes of emergency contraception and abortion. In Italy, for example, despite the law number 194 approved in 1978, the percentages of gynecologists objectors in hospitals are growing more and more (around 70%). An overwhelming majority that makes, in some Italian regions, almost impossible to resort to voluntary termination of pregnancy.

In the workplace the wage gap persists: it sees a difference in salary between men and women which varies from 20% to 40% depending on the profession. Furthermore, 50.7% of women doesn’t have an occupation that determines a stable income and a third of female workers leave work due of motherhood. The workplaces are also where sexual harassment and violence often occur against workers or such aspiring. In fact, women who testify that they have suffered different types of harassment during the first job interviews are constantly increasing. It comes in many cases of precarious young people who most of the time are silent so as not to suffer consequences from the working point of view.

Maximum example of this conception of woman as a lower subject to be protected and regulated is the legitimation of rape still today justified by many representation of the woman as provocateur of presumed “masculine instincts”, crushed on the stereotype of a saint or a whore.

The situation is even worse for migrant women. We see it with heavy discrimination they suffer because more easily blackmailed and three times discriminated as women, proletarians and foreign citizens. The Salvini Decree makes worse an already serious situation, from unsecured access to the health, to bigger difficulties in finding support structures in case of violent relationships with family members, to the continuing threat of expulsion to countries where female conditions are sometimes even worse.

Who in recent years has stood out among the herd for a more racist and sexist propaganda, today sits on the benches of government, continuing to chatter about the body of women with a patriarchal, paternalistic and therefore deeply authoritarian culture. A culture of which the latter government doesn’t have the unique heritage, but is simply its most crude interpreter. This can be seen from the speeches about birth and traditional family, from the permanent electoral campaign in favor of the traditional family, of a hierarchy between the sexes and of the fixity of gender roles. A government in perpetual electoral campaign that speaks about the female body as “national good” to be put under protection and denying to all effects the individual subjectivity of women.

To all this we must add the bill of the Minister Pillon, member of Lega Nord, which aims to regulate the separation and custody of children by imposing, even in case of alleged physical violence by husband or wife, a kind of an equal custody between the two parents. Moreover, equal custody would presuppose also the cancellation of the maintenance allowance and the creation of a sort of expenditure budget to be divided between husband and wife. In a country where 50.7% of women doesn’t have a job with a stable income, the economic blackmail is evident. These are just some of the many features of the bill that would make it even more difficult for a woman to denounce violence and separate from her husband, generating a condition of open blackmail. A law such as this would put an economic precondition against the couples who want to separate, regardless of the reasons, and would further affect their children. 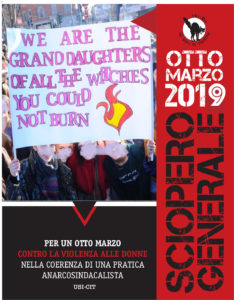 These are just some examples that show how gender discrimination is still today one of the many contradictions of our society, which categorizes women as victims to help, as an object of exclusively male property and as people unable to choose and to defend themselves. The feminist struggle fights to disrupt current relations of force and walks hand in hand with class struggle and anti-racist struggle.

For this reason, we relaunch the deadline of 8th March as an intersectional and internationalist deadline, of radical, anti-racist and anti-sexist struggle, as it includes all these areas that aren’t and can’t be separated.

As Unione Sindacale Italiana, we think that only with intersectionalism, that is capacity to weave relationships between only apparently separate struggles, we can break down the patriarchal culture of which capitalism and statism are imbued.

The strike as an answer to all forms of violence on women’s bodies and minds. The strike as a praxis to take up the management of our lives and our bodies from the hands of the state, as a path of abatement of the first nucleus of authoritarianism: the patriarchy. The strike to build a path that goes beyond the mere claim of rights, to give birth in our time to a germ of freedom for a future society of free and equal people.

[Poland] Not a single step back! We keep on fighting!

The “essential” thing is to exploit us a little bit more

General strike in Myanmar against the coup

To our comrades and friends across the world…thank you from Dhaka, Bangladesh.

The owners of Dragon Group begin payments. But it’s not enough…

Struggle and solidarity keep us strong!

Internationalism and struggle against patriarchy

Delegation of the FAU in Northern Iraq