CNT Gijon (Asturies, northern Spain) have a long outstanding labour conflict with the owners of the cake shop La Suiza. The initial demands were for unpaid wages and respect to working conditions. As part of the conflict, a number of pickets were held and leaflets distributed. Fairly straightforward. However, the owners are members of the far-right party Vox and are well connected with local police and the bosses’ association.

Instead of negotiating a settlement, they orchestrated an intimidation campaign against our comrades. Some were arrested, later released without charges, and a number of businessmen filed a lawsuit against the union for “unlawful association for the extortion of company owners”.

If that sounds XIX century to you, that’s because it is. The struggle for workers’ rights of association, to form unions and to lawfully protest and bargain may have been settled all over in the early 1800s, but not in northern Spain, not in Gijon.

Long story short, after a lot of judicial wrangling, 8 union members stand accused of “threats, insults and coercion”. The prosecution is demanding 3 years in prison and a 60.000 € fine, each. After several delays because of the pandemic, the trial is expected next May. 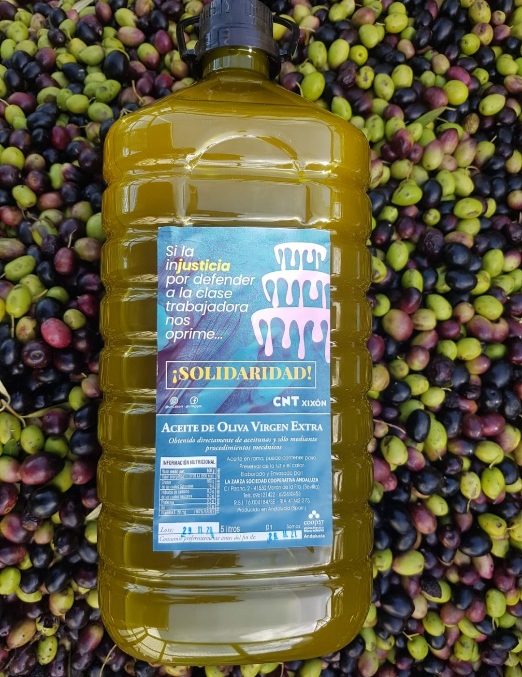 The comrades are standing firm in their defence of workers’ rights and in defiance of this long intimidation campaign. Much is at stake. If union members in general can be accused of “issuing threats” for a lawful campaign to stop workplace abuses, a basic freedom will be taken away from us.

In the meantime, legal expenses have been mounting. Even without considering possible future fines, the comrades are in bad need of financial support. The union at Gijon have been selling olive oil bottles in Spain for quite some time to raise the money they need. Now, they’ve made arrangements to also send the bottles anywhere in Europe. The oil has been donated by a cooperative in Andalusia run by SAT, a union of rural workers.

To make the delivery cost effective, a box with four 5-litres bottles have to be ordered for a price of 140€ (including VAT and delivery expenses). This is ideal for a group buy. You can now support the comrades and order a box simply by sending an email to aceitesolidario2@gmail.com or through WhatsApp/Telegram to +34 644 064 888, indicating an address, a contact phone number and any delivery instructions that may be required (e.g., opening hours, contact person, etc.)

Once confirmed that your request has been received, you can transfer the money to the following bank account:

You should get your olive oil delivered in a few days time!

Of course, any other forms of support are also welcome. Thanks in advance for making a stand for basic workers’ rights!

General strike in Myanmar against the coup

Destroying the planet one parcel at a time!

Destroying the planet one parcel at a time!

HENRY SCHEIN, a multinational company supplying medical equipment, has profited from the current pandemic, yet it EXPLOITS and FIRES its workers.