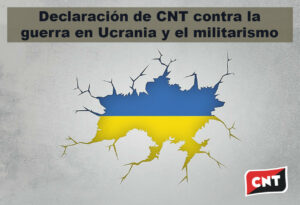 In view of the growing military deployment in Eastern Europe, CNT issues the following statement:

The international conflict that has been instigated and is being maintained in Eastern Europe  benefits only the interests of the minority that controls the resources. NATO’s military threats against Russia, and Moscow’s response by mobilizing troops to its border with Ukraine, cannot be explained without considering the underlying dispute regarding access to the natural resources of the Arctic, especially natural gas, and trade routes to China. The dispute over the control of these resources directly affects the majority of society, whose lives are becoming more expensive due to this conflict between international oligarchies, who fight for their share of the spoils. The living conditions of the working class in Europe are deteriorating; meanwhile, we are held hostage.

The stance of the Spanish government, which has been to actively participate in the military maneuvers taking place in the Black Sea and Baltic countries, as well as to host the NATO’s summit in June 2022, is an insult, an offense, to the same working class that has been actively fighting militarism for decades. We fought against NATO membership, we fought against compulsory military service, we fought against Spain’s participation in the Iraq War. The participation of Spanish troops in the military movements against Russia is totally unacceptable; and so it was the attack against Iraq in 2003, the consequences of which we all know well. In the end, it is the working class that ends up lamenting the loss of their loved ones.

The Spanish government increasingly uses military manpower to fulfill civilian duties, such as firefighting, or contact tracing during the pandemic. This militarization of life means, in practice, stripping those who perform the essential services in our society of all their labor and union rights. The budget allocated for military purposes is justified in this way, but let us not forget that every Euro that goes to the war frigates that today serve NATO in the Black Sea is a Euro not spent on infrastructure, health, education, pensions, or any other public service.

CNT denounces the participation of the Spanish government in these maneuvers against Russia. We demand NATO to be abolished and its structures dismantled. We urge the working class to organize against militarism and to fight for the abolition of all armies, worldwide.

The war is not against Russia, it is against the working class.

The working class must respond: War on war!