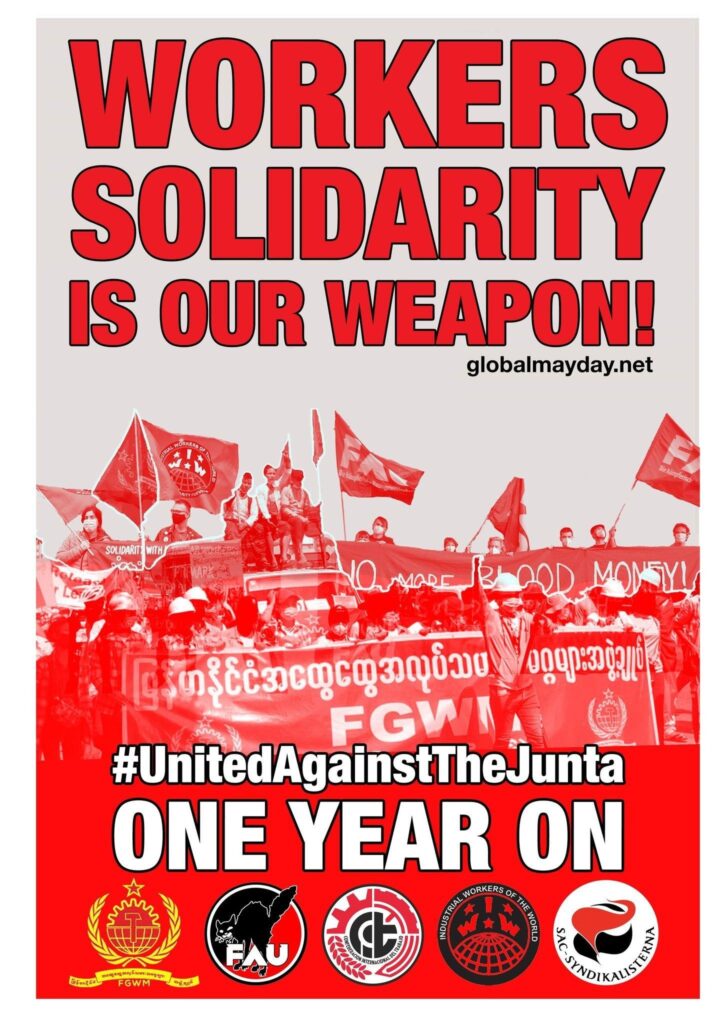 February 1, 2022 marks a year of military coup in Myanmar. During the one year-period of coup, the military have brutally killed, tortured, or unjustly arrested thousands of people of different nationalities including students, youths, workers, farmers, and journalists. Moreover, hundreds of thousands of defenseless residents from Chin state, Kachin state, Karenni state, Karen state, Sagaing region and Magway region had to flee their homes due to the military’s indiscriminate airstrikes using helicopters and fighter jets. The military had also scorched people en masse alive, destroyed and looted the properties.

Today marks one year anniversary of peoples’ resistance in various ways against the coup and military dictatorship in Myanmar . We salute to the fallen comrades who were killed by the military and its affiliates while resisting against the coup on this one-year anniversary of resistance. We also salute the workers, farmers, CDM (Civil Disobedience Movement) staff, women, youth, students, LGBT and people of different socio-economic backgrounds who continue to resist the military dictatorship and chauvinism.

Nowadays the workers who bravely resisted against the coup at the forefront of the resistance movement are met with not only repression by the military but also labor rights violations at the workplace by the bosses. During this period, the employers are flagrantly violating the legal labor rights, human rights, and collective bargaining agreements. There were also many workers who died from third wave of Covid-19 that broke out during the coup. By taking the advantage of political instability, bosses are unreasonably dismissing permanent workers and substituting them with daily wage workers who are paid less than the legal minimum wage. The employers also refuse to pay the full wage, and there is also exploitation and forced labor. Due to the distrust of the mass of workers and the oppression of the military apparatus as a consequence of the coup, the dispute resolution mechanism – that aims to settle the labor disputes – is of absolutely no use. In addition to that, bosses intentionally destroy the labor unions and give information of the union leaders to the military. Thus, this threatens the labor unions to exist independently.

The workers of Federation of General Workers Myanmar (FGWM) have been resisting the military dictatorship in various ways until today. Likewise, we are listening and documenting the voices of the workers whose human and labor rights are violated under the military rule to help resolve their grievances once the resistance against the dictatorship is accomplished. FGWM has also assisted the CDM workers from the public sector in their organizing efforts and showed solidarity actions for the workers and the partners who were resisting the military dictatorship.

Regardless of the direct oppression, forced labor and various threats at the workplace, workers who are unprotected under the law are demanding comprehensive economic sanctions that can drain the income sources that are directly or indirectly benefiting the military in order to annihilate the military dictatorship and liberate from the slave life under the military rule. We urge the unions around the world to show support for the demand of the workers and to assist the workers with any challenges and difficulties ahead by acting of solidarity. We, FGWM who led the earliest anti-junta resistance in Yangon at the forefront, would like to say on this one-year anniversary of resistance that we will continue resisting until the end of military dictatorship and chauvinism, and the establishment of federal democracy in Myanmar.