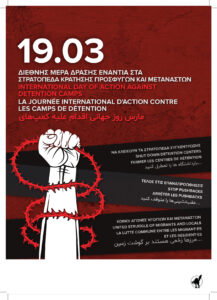 We must call matters by their names: the so-called refugee and immigrant reception centers in Greece are places of torture and barbarity. People are penned up on top of each other in miserable conditions, the food is uneatable, hygiene and cleanliness are impossible, and there are no doctors or medicine. The police beat (sometimes to death), torture, and mock the residents every day. The hell of Moria, which was illuminated for a short moment by the flames that burned the camp, is only one of many such places of misery scattered around the Greek territory, where human life has no value.

Regardless of whether they came to Greece as immigrants or refugees, the people who move between the camps and reception centers and our communities are the same people who work for scraps without insurance in the agricultural fields and in construction, as cleaners in our cities, and in other similar jobs. They are part of the global, multi-ethnic working class who are under constant attack. Europe’s labor movement and unions are obliged to make the closure of these camps a priority. Capitalism and states instigate wars with the aim of securing ever-expanding profits for the bosses, and then use legislation to curtail the free movement of people, in so doing criminalizing refugees that are fleeing war zones. Border controls function as tools that create exploitable workers. The migrants and refugees who manage to reach the West are exploited as cheap labor without rights and confined in wretched reception centers and camps. The European Union finances this modern-day hell on earth, and at the same time creates the legal basis for confining refugees in Greece.

Since the pandemic began, the Greek state has been targeting immigrants inside and outside the reception centers, accusing them of importing and spreading the virus. In these centers there is no protection from infection and no access to medical care. Since the extension of quarantine measures in October 2021, these formerly open facilities have been locked down and have become de facto prisons. The martial law under which the refugees have been living has thus been expanded by the legalization of their detention in these miserable conditions. From the new Moria that is being built in Kara Tepe (Lesbos) to the Amigdaleza camp and the Eleona and Petroy Ralli districts in Athens, we must fight for the closure of all camps, whether they are open or locked down. It’s an obligation to ourselves, our class, and humanity.

The resistance to the new war in Ukraine, the ever-raging war in Syria, and in other parts of the planet is dependant on our common struggles with the refugees and immigrants in our own countries. We need to create foundations for a global, worker-led, anti-war and anti-racist coordination in order to block the mechanisms of war that are sowing death.

As the Libertarian Syndicalist Union (ESE), we decided to coordinate with autonomous, self-organised collectives that stand in solidarity with immigrants and organise an international day of action against detention centers. In the course of this day of action, we will hold demonstrations and interventions in every city of Greece where we have a presence. We call on all the anarcho-syndicalist organisations in Europe and the world and on all libertarian and anti-racist collectives to join us on the 19th of March 2022 in the struggle for the closure of all detention centers and camps. Inform your co-workers about this modern-day crime against humanity and organize events and demonstrations. Let us begin coordinating international actions against the camps. Let us fight against wars and racism until we shut down every last one of these purgatories.

Every action, whether it is in the form of a callout, a demonstration, or a march is of significant importance for us. Please inform us as soon as possible of any action that you decide to undertake, and spread the word about our day of action on your social media and other platforms.

For a new world of freedom, equality, and solidarity!

There is room for everyone!

Shut down all camps!

For the legalisation of all migrants and asylum for all refugees!

Solidarity with School Teachers in Greece