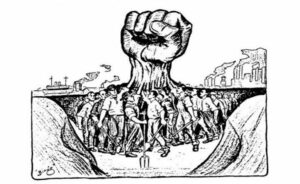 All the grassroots unions in Italy are united against redundancies and social carnage and are calling a 24 hours-long nationwide general strike in the private and public sectors on 18/10/2021.

The redundancies at the companies Ginetti Gomme, GKN and Whirpool come at the same time as thousands more workers are fired in smaller companies that haven’t made it to the headlines. Altogether, more than 900,000 workers have lost their jobs in recent months. This is happening with the complicity of the mainstream unions CGIL-CISL-UIL and is inextricably linked to the capitalist restructuring plans put in place by the bosses through the directives of the Draghi government and the European Union.

The Covid-19 pandemic has had a devastating social impact on health and on living, working and wage conditions, that is still ongoing. Regardless, this has not prevented the bosses from increasing exploitation in the private and public sectors: production rates and controls in factories have increased while the most savage forms of precariousness are becoming common place. Companies are using the excuse of a downturn, that quite often is only seemingly real for them, to raise the spectre of mass layoffs. Their true goal is to outsource production and/or replace a workforce whose labour conditions are guaranteed with over-exploited and under-paid youngsters.

The pandemic has dramatically exposed the collapse of the health system caused by a decades-long policy of cuts and privatisations, as well as the destruction of social services (education, transport, childcare, etc.). The Draghi government, far from reversing this trend, is accelerating it, as demonstrated by its deregulation of the outsourcing of services and its use of the EU PNRR recovery funds. Most of these are being handed out to bosses and speculators, themselves the main culprits of the economic crisis and the health and social disaster that we have witnessed over this year and a half of the pandemic.

State repression of strikes and social struggles has increased intolerably, with police attacks and brutality, fines and arrests. This has actually served as a green light for company thugs to act against workers and union activists. There have been many such instances of violent attacks in recent weeks, culminating in the murder of unionist Adil Belakhdim.

Faced with this scenario, there is an urgent need for a decisive, united and coordinated response on a national scale. For this reason, grassroot unions are calling a day-long general strike in the private and public sectors on 18 October 2021.

From now on until that day, we will work towards building a real and permanent state of agitation, with assemblies and actions in the workplace and on the territory. We aim to mobilise all those movements and social sectors that are opposed to the plans of super-exploitation, precariousness, unemployment, social and environmental devastation that the bosses are dictating, nationally and internationally. For this reason, we state our commitment to build-up a protest movement towards the end of October against the G-20 meeting in Rome.

The General Strike has the following demands:

– Stop the attack on jobs and wages. No more redundancies. Decrease the number of working hours without pay cuts to prevent job losses.

– Recover the purchasing power of wages. Substantial wage increases and the implementation of a mechanism to safeguard wages from inflation.

– Maintain income through a guaranteed average payment for the unemployed. Free and universal access to social services and a unified benefits system that ensures the maintenance of income and payments.

– Step up public investment in schools, health and transport. Stop privatisations, commodification and the destruction of essential public services, basic sectors, public utilities and infrastructure. Prevent the implementation of different projects by region and current forms of regionalisation, for equal rights and services throughout the country.

– Implement true trade union democracy and end the monopoly of mainstream unions. Grant workers the power to decide who should represent them. Defend the right to strike and repeal all repressive legislation that undermines and reduces the impact of strikes, first of all the so-called Salvini decree.

– Reinforce worker safety, inspection systems and the role of the RLS.

– Protection migrant workers and issue residence permits for all migrants.

– End gender discrimination and achieve real equality in wages, employment and women’s rights in the workplace and society.

– Cancel the G-20 meeting in Rome and the hypocritical catwalk of the world bosses, for unity and international solidarity between the struggles of workers and the exploited.